These set of videos cover my public talk on my book Indra’s Net in Bangalore.
In this public meeting, the kannada translation of my book Being Different (Vibhinnate) as well as the kannada translation of 12 of my blogs (Vibhinnate Sankshipta Rupa) was released by Sri Sri Sri Nirmalanandanatha Swamiji of Adichunchanagiri Math and Justice N Kumar of the Karnataka High Court. This programme was held at the Indiranagar Sangeetha Sabha, Bangalore and was organized by Uthishta – a socio-cultural group (www.uthishta.org). 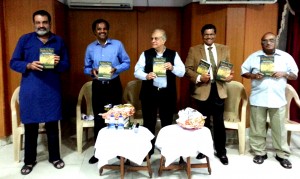 Rajiv’s Lecture on the Strategic Positioning
of his Four Books

Is Hinduism Defined as a Way of Life?

Why is the book titled ‘Indra’s Net’

Clarification of the Principle of Mutual Respect

What Should we do about Media Bias?

What is Wrong with Ford Foundation?

Release of Kannada Edition of Being Different

Address by N. Kumar
Justice of the Karnataka High Court